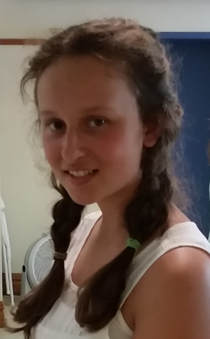 Anybody who knows me knows that I love books and reading, and that definitely impacted my decision to start volunteering here at the library last winter! My family and I moved up here to Benzie about three years ago, from around Grand Rapids, and I am thirteen and going into eighth grade
at BCMS. I have three little brothers. I love playing football, soccer, and skiing, also power lifting and conditioning, drawing, singing, and doing plays and musicals. My latest role was Gee Gee Hayes in Murder at the Goon Show, (a.k.a. the crazy bird lady that does awful bird imitations and wears a bird cage over her head). Which was fun. A lot of fun.

Some of my favorite authors are Joanne Rowling (No guesses which books), Rick Riordan, and Cassandra Clare. All of them have things-in-process right now, which couldn’t be better (Actually, if they were released this second into my arms, it could be.) I love Star Wars, too, and CAN. NOT. WAIT. for Rogue One and Episode Eight to be released. Hope to see you at the library!
BPL staff think Reeve is wonderful and are thrilled to have her volunteering at the library.
She’s enthusiastic, hard working, confident, and lots of fun.  On her1st day, a patron asked for help with OverDrive.  Reeve heard what the woman needed, offered to help, and within minutes
had the woman’s Kindle set up and was giving an OverDrive tutorial.
Thank You Reeve, you’re awesome!