The 2020 Census counts every person living in the 50 states, District of Columbia, and five U.S. territories. The count is mandated by the Constitution and conducted by the U.S. Census Bureau, a nonpartisan government agency. The 2020 Census counts the population in all 50 states, the District of Columbia, and five U.S. territories (Puerto Rico, American Samoa, the Commonwealth of the Northern Mariana Islands, Guam, and the U.S. Virgin Islands). Each home will receive an invitation to respond to a short questionnaire—online, by phone, or by mail.

Why We Conduct This Count
The census provides critical data that lawmakers, business owners, teachers, and many others use to provide daily services, products, and support for you and your community. Every year, billions of dollars in federal funding go to hospitals, fire departments, schools, roads, and other resources based on census data.
The results of the census also determine the number of seats each state will have in the U.S. House of Representatives, and they are used to draw congressional and state legislative districts.
It’s also in the Constitution: Article 1, Section 2, mandates that the country conduct a count of its population once every 10 years. The 2020 Census will mark the 24th time that the country has counted its population since 1790.

Counting Everyone
Participating in the census is required by law, even if you recently completed another survey from the Census Bureau. A COMPLETE AND ACCURATE COUNT IS CRITICAL FOR YOU AND YOUR COMMUNITY, BECAUSE THE RESULTS OF THE 2020 CENSUS WILL AFFECT COMMUNITY FUNDING, CONGRESSIONAL REPRESENTATION, AND MORE.

Important Dates
In mid-March, homes across the country will begin receiving invitations to complete the 2020 Census. Once the invitation arrives, you should respond for your home in one of three ways: online, by phone, or by mail. 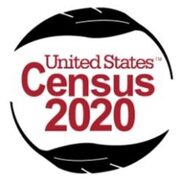 Overall Timeline
Counting every person living in the United States is a massive undertaking, and efforts begin years in advance. Here’s a look at some of the key dates along the way:
2020
January 21: The U.S. Census Bureau starts counting the population in remote Alaska. The count officially begins in the rural Alaskan village of Toksook Bay.
March 12 – 20: Households will begin receiving official Census Bureau mail with detailed information on how to respond to the 2020 Census online, by phone, or by mail.
March 30 – April 1: The Census Bureau will count people who are experiencing homelessness over these three days. As part of this process, the Census Bureau counts people in shelters, at soup kitchens and mobile food vans, on the streets, and at non-sheltered, outdoor locations such as tent encampments.
April 1: Census Day is observed nationwide. By this date, every home will receive an invitation to participate in the 2020 Census. Once the invitation arrives, you should respond for your home in one of three ways: online, by phone, or by mail. When you respond to the census, you’ll tell the Census Bureau where you live as of April 1, 2020.
April: Census takers will begin visiting college students who live on campus, people living in senior centers, and others who live among large groups of people. Census takers also begin conducting quality check interviews to help ensure an accurate count.
May – July: Census takers will begin visiting homes that haven’t responded to the 2020 Census to help make sure everyone is counted.
December: The Census Bureau will deliver apportionment counts to the President and Congress as required by law.

2021
March 31: By this date, the Census Bureau will send redistricting counts to states. This information is used to redraw legislative districts based on population changes.
Here are some of the efforts completed in 2019:
January – September: The Census Bureau opened more than 200 area census offices across the country. These offices support and manage the census takers who work all over the country to conduct the census.
August – October: Census takers visited areas that have experienced a lot of change and growth to ensure that the Census Bureau’s address list is up to date. This process is called address canvassing, and it helps to ensure that everyone receives an invitation to participate in the census.