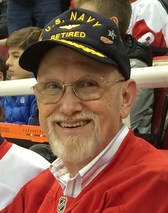 Roger and Helen (a retired librarian, now a Benzonia Public Library trustee) have been married 46 years and have two daughters – Margaret, living near Kansas City, and Jocelyn, living near Washington DC.  Roger is a retired Navy helicopter pilot, and he later worked as a Department of Energy contractor in DC.  He earned a BS in chemistry from Brown Univ. and an MS in Nuclear Science from the Air Force Institute of Technology.

In 2004, Roger and Helen retired to their Crystal Lake cottage on a tiny fraction of the 55 acres called “Pinecrest” that Helen’s Wolfe ancestors bought in 1903.  Roger enjoys woodworking, sailing his Hunter-146, kayaking, and reading murder mysteries and lots of science fiction (especially David Weber, Eric Flint, and Lois McMaster Bujold).  Most of all, both are passionate fans of all levels of hockey, from small kids to the TC North Stars to the Red Wings.

Roger just ended 10 years on the Point Betsie Lighthouse board, having served as vice president, secretary, and chair of the committee overseeing the lighthouse’s interior restoration and the construction of the new Boathouse museum.  In addition to volunteering with the Friends, he is also currently serving as secretary of the Mills Community House Association board and is helping to oversee ongoing remodeling efforts at the Mills and the Library.